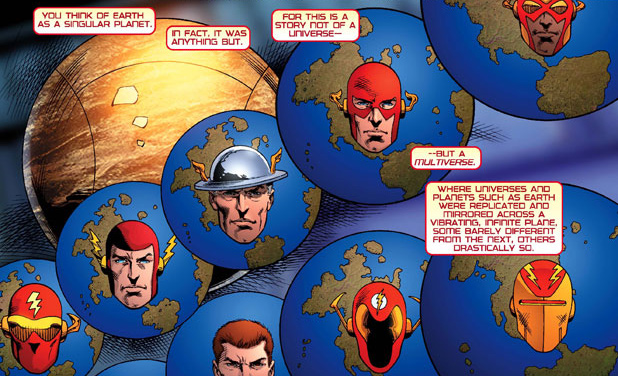 If you are new to comic books, you might be asking yourself “What is all this Multiverse/Earths talk?”. To put it simple is rather hard. But still, let’s try.

Comic books have a very long history. They tell stories about a lot of different characters, but at the same time mostly about the same characters. They also have a very strong connection to society and as it evolves and changes so should they too. As such events or stories that were relevant or interesting yesterday might no longer be as important today. What can an author do, when such thing happens? When a radical change in the story or simply when a different spin on a character is required. Should they retcon everything that has happened before? What if we want to write about the same characters who have mostly the same origin but have them all in Zombi-form. What if we want to explore how a character will behave if they live in the 100th century.

To solve the problem and to give its writers a creative freedom, DC Comics introduced the DC Multiverse concept, a fictional universe comprised of different parallel existing dimensions called Earths. Each Earth has its own timeline independent from the others. It also has its own characters and stories. From time to time a major event causes characters from different Earths to cross paths. Usually such events result in major changes to the DC Multiverse. Major changes might include destruction/creation/merger of Earths and changes in timelines.

Next: Read about the different Earths in the Injusticeverse