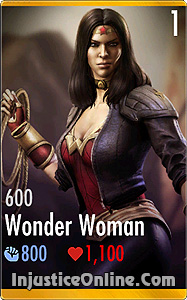 Bio: The 600 Wonder Woman is inspired by the design of Wonder Woman in Wonder Woman Issue #600. The issue was release in August 2010 and was game changing for the character. It introduced Wonder Woman to an alternate timeline created by the Gods in which Paradise Island had been destroyed and the Amazons scattered around the world.

In this timeline, Diana is an orphan raised in New York. She is learning to cope with her powers. The entire world has forgotten Wonder Woman’s existence and the main story of this run was of Diana trying to restore reality even though she does not properly remember it herself.

600 Wonder Woman is one of the strongest characters in the game. She is only weakened by the limitations of her passive abilities which only work on female team members. She can however be combined with the other two female characters from the Femme Fatale Pack (Animated Harley Quinn and Batgirl) to form a really deadly team.