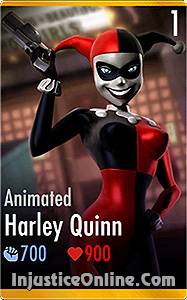 Bio: The Animated Harley Quinn is inspired by the portrayal of the character in DC Animated Universe. She first appeared in the show Batman: The Animated Series in the episode Joker’s Favor and has frequently appeared ever since. She is The Joker’s henchwoman, girlfriend, and previously his psychiatrist at Arkham Asylum. She has also appeared in The New Batman Adventures and Batman Beyond.

Animated Harley Quinn is very useful character in combination with Joker characters as she will increase their stats by 40%. Her Passive and Special abilities can benefit each team member. She is capable of increasing health, damage and power.