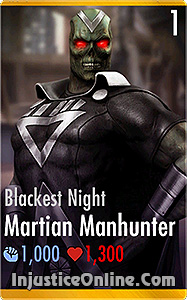 Bio: Blackest Night Martian Manhunter is an Injustice Mobile exclusive character, who arrived with version 2.6 of the game. As an original character he does not have any story in the comics or in the game itself.

Martian Manhunter is Mars sole survivor and will risk anything to protect Earth and all of its inhabitants from destruction similar to the one that caused the extinction of his own people.

While tagged in the character will cycle through three different states, with each giving him different advantages.

POWER Generation: In this state Blackest Night Martian Manhunter will generate power at a faster rate.

DEFENSE: In this state Blackest Night Martian Manhunter will take 50% less damage from all known sources.

All these abilities make the character an excellent choice and fit for every team and give him and his team mates interesting advantage in Survivor Mode.