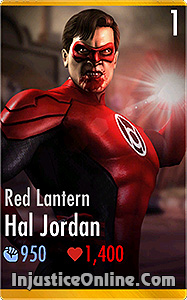 Bio: A group of berserkers led by Atrocitus, the Red Lanterns draw on rage to build constructs made of red light with their power rings. When they are inducted into the Corps, a member’s blood is replaced with liquid fire, and their heart is replaced with the ring, so if the ring is taken off, unlike in the cartoon series, the wearer will die. Members of the corps can expel this substance from their body at will like napalm, causing burns.

Red Lantern Hal Jordan is the character with the most health in the game. This is due to his special moves draining his health instead of his energy. The character can neither be healed nor can benefit from characters who increase the energy level of their team mates.

His passive ability makes him a bad choice for Survival Mode but can make him an interesting addition to your team in any other mode.

Starting with update 2.7 of the game, the damaged cause by his Special 1 has been corrected. Unfortunately the damage caused by Special 2 has been reduced to much and the move is currently practically useless.

Also starting with version 2.7 of the game, his special moves will have to cool down after being used. This will not allow you to perform one special immediately after another.