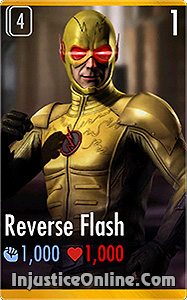 Bio: The Reverse Flash Injustice Mobile gold character is based on the character by the same name from the CW TV Series The Flash. His real name is Eoboard Thawne and he is from the future. The Reverse Flash got stuck in the present when he tried to kill Barry Allen and in the process lost most of his speed. Eoboard Thawne was posing as scientist Harrison Wells in the show’s first season and created The Flash and all metahumans in the series. He was the main antagonist throughout the season and was killed Eddie Thawne, who shot himself, thus erasing Eoboard Thawne from existence.

Cellular Regeneration: While active, the Reverse Flash has a chance to immediately regenerate HEALTH and CLEANSE negative effects after taking damage from a Special Attack. May occur 3 times per match.

Lightning Kick: The Reverse Flash deals a series of ultra-quick kicks, temporarily increasing his attack speed (by 15%).
Out of Time: Facing multiple opponents is nothing new to Eobard Thawne.
Speed Zone: The Reverse Flash delivers super-speed punches on his opponent. Unblockable.

Like any other Flash character in the game, the Reverse Flash is one of the fastest. This gives him the extreme advantage of landing series of attacks without being hit by his opponent. This makes him perfect for combating enemies that are powerful than him and one of the best characters for Multiplayer and Survival Mode.

What however makes him a bit less effective is the fact that his combos push the opponent back so that the Reverse Flash cannot immediately continue with another combo and his opponent has a greater chance to attack. This will however absolutely not be an issue if you manage to capture your opponent in the corner.

Reverse Flash’s passive ability makes him an amazing character for absorbing the special attacks of your opponent. If you see that you opponent is getting to special 2, select The Reverse Flash. When you opponent executes his special there is a pretty big chance The Reverse Flash will absorb all its negative effects rendering the execution of the move useless. There is however a chance that the move might affect the character as well.

Reverse Flash’s speed and most importantly his passive ability gives make him an excellent choice for Survivor Mode. With his cellular regeneration passive ability you might be able to protect your team from some really nasty attacks in that mode, so try to keep The Reverse Flash alive for as long as you can.