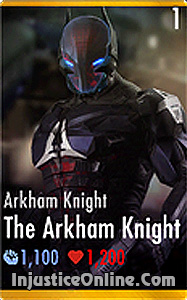 The true name of The Arkham Knight is Jason Todd. Sometime before the events of Batman: Arkham Asylum, Jason Todd is selected by Batman to become the new Robin after Dick Grayson decides to go off on his own and become Nightwing. Later, The Joker kidnaps Todd and sends a video to Batman, showing the alleged murder of Todd. In reality, Todd was still alive and being tortured by the Joker for over a year in an abandoned wing of Arkham Asylum.

During his torture, Todd comes close to telling the Joker what Batman’s true identity is, but he is seemingly shot by the Joker before he can reveal the information. However, Todd survived the gunshot wound, and as a result of the torture, had immense hatred towards Batman and begins working on his revenge.

The Arkham Knight’s story is currently not related to the Injustice story line in any way.

Arkham Knight The Arkham Knight has some of the most powerful basic stats in the game. His has effective combos but somehow unimpressive special attacks when compared with some of the other gold characters.

Know something we don’t, let us know in the comments and we will add it.