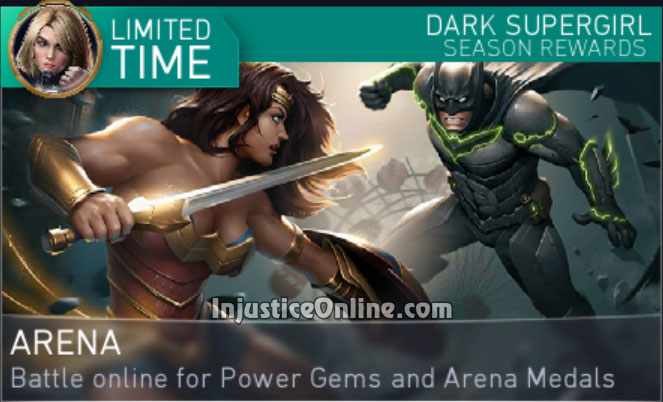 The next Arena Season for Injustice 2 Mobile is here. It gives you the chance to compete for gold Dark Supergirl character shards.

Dark Supergirl is a three star gold might class character and has the following basic stats:

Threat: ???
Health: 990
Damage: 165
Passive: Kryptonian Slam
Description: As she tags in, Supergirl lands an Unblockable attack that deals 33 damage and can interrupt abilities. If she interrupts the opponent during an Ability, she gains 100% damage and 100% crit chance for 7 seconds.

To obtain Dark Supergirl character shards you will have to reach at least Challenger II rank. Here are the shards per rank:

As with every other reward and challenge you can expect the Dark Supergirl season to show up every once in while so if you have missed it so far you will definitely get another chance.