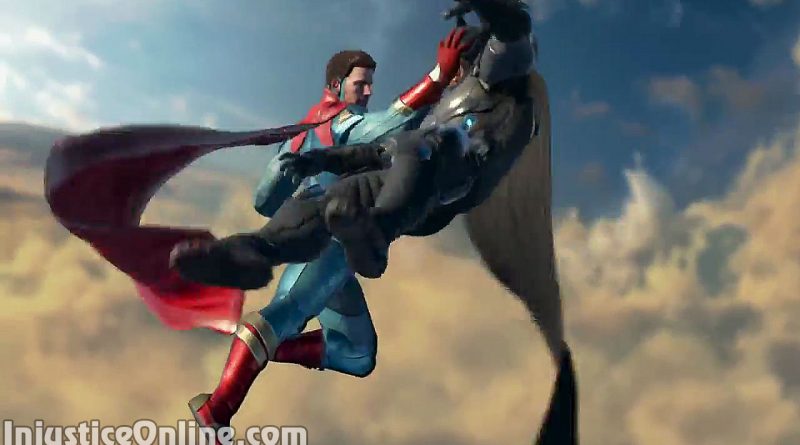 It has finally arrived. Just as previously announced the gameplay reveal trailer for Injustice 2 was released during the Mortal Kombat X ESL Season 3 Finals. Before we begin with our breakdown lets take a look at it:

Overall I must say, Injustice 2 looks awesome, it’s like Injustice: Gods Among Us on steroids. It kind of reminds me of what Mortal Kombat II was compared to Mortal Kombat 1. Everything in the trailer looks so epic, so dramatic. The best example is may be the Aquaman super move. In Injustice Gods: Among Us he summons a shark, in Injustice 2 he summons some sort of a sea monster in a much darker setting: We see that the game has retained most of the traits of the original, including the Super Moves and the interactive arenas with transitions. But this is also where the similarities end.

The gameplay trailer gives us a closer look at the customization of the characters with different gear. Each character will apparently have different types of gear that they can equip. Depending on the gear the character will gain a different sort of advantage. The best example for this is Batman who in the trailer goes through several different upgrade stages:

The game will clearly target the tournament scene and not just the casual players. Here is where character upgrades and gear might cause a huge problem. If you are able to make your character more powerful, how are they going to keep the game balanced. We will be able to answer this question once we know how the upgrade system actually works. The system itself must be the Injustice 2 version of the Mortal Kombat X’s character variations.

3 new to the franchise characters were shown in the trailer. Lets take a look at them:

Definitely one of the highlights of the trailer. We just love how tiny yet extremely strong she is. Can’t wait to see how she fits in the conflict between the characters of the Injustice universe.

This one will be so much fun. Atrocitus is a member of the Red Lantern Corps and with his inclusion in the trailer Netherrealm Studios reveals a whole new fraction that we haven’t seen in the Injustice universe yet. Was Atrocitus the reason why Red Lantern Hal Jorden appeared in Injustice Mobile several months ago? What do you think?

With the popularity of the character on The Flash TV series, it wasn’t really a surprise that Netherrealm Studios decided to include Gorilla Grod as a playable character in the game. Seeing him in a video game shortly after the release of Blizzard’s Overwatch however makes me think how much he reminds me of Winston.

3 returning characters were shown in the trailer. They all have received a face lift, where more where less significant, with Superman’s design probably being the most evolved since the last game. Aquaman looks bad ass as well and unfortunately we don’t get to see much of the caped crusader in the trailer to form an opinion about him. Please note that in the case of Aquaman, this is a second skin that is revealed for character.

This trailer is really exciting and we hope to see much more in the coming months, so stay close to InjusticeOnline.Com for the latest Injustice 2 news and breakdowns.