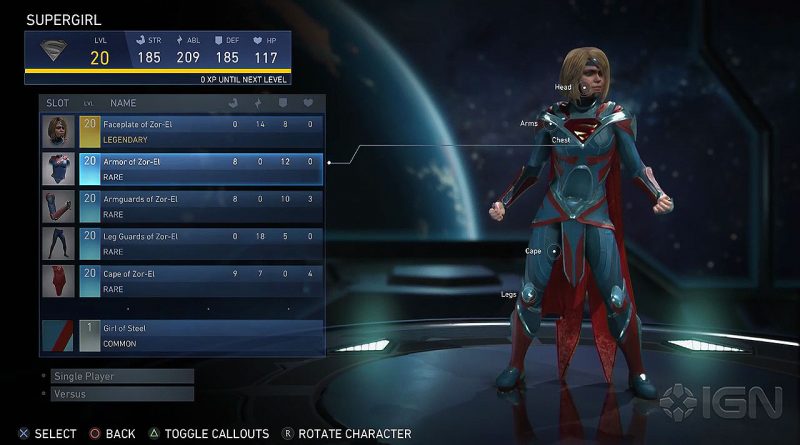 Ever since Injustice 2 was announced several days ago and the gear system was officially revealed, fans of the franchise have all been asking the same questions: Won’t the gear system lead to an unbalanced game. How will this work on tournaments. …

Apparently all these have reached not only Netherrealm Studios but also different gaming website as GameSpot, Gamasutra and GameInformer have all published interviews with members of the development team that focus exactly on the gear system and the balancing issues.

There’s a worry this could impact game balance, which is big considering Injustice has become a staple title in tournaments. There have been comparisons to Street Fighter X Tekken’s gem system.

We’re certainly not doing gems. We’re definitely not going to do that. We will absolutely have some kind of a mode, whether we call it Tournament Mode or something like that we haven’t decided. That’ll provide the level playing field version. We’re definitely not going to have people strolling into tournaments with level 50 Batman and kicking everybody’s ass. We’re not crazy. That sounds incredibly tricky to balance.

You correctly identified the core issue: we’ve been working on it for years. Throughout development of Injustice 1, really, because that’s when we started thinking about how to do this. So this has been in development for a long time. You can expect a sort of arena system, like you’d see in something like a MOBA, that will give players a chance to use the gear but still keep everything balanced.

So balancing really involves the modes, the gear itself, and then making sure the changes players can do with gear and acquiring specials and all that are balanced. To do that, we have a dedicated little team that focuses on the tournament crowd. Because we love them; it’s part of our studio culture at this point. And it’s really hard, it’s our great challenge. The idea of gear is meant to make it so players are imbalanced, which as any fighting game fan will tell you, violates several of the genre’s rules. Boon tells me that it’s not about balance, but rather putting unique twists on the genre. “The whole function of it is constant improvement, so it’s not like we want everyone to be balanced from the standpoint of using the gear – that’s the whole purpose,” he says. “Where balance comes into play for me is when you’re talking about tournament play or you’re playing with your buddies on the couch or some kind of scenario where you want an even playing field. We are obviously going to be including an option to go into ‘tournament mode’ or ‘regulation mode’ or something like that. To us, the fun part is going to be, ‘oh you beat me and I’m at level 20 and you’re at 18’ or something so I have motivation to get cooler gear and come back at you with my better version of my Batman.”

So, there you have it, Netherrealm Studios seems to be on top of things here. We will all have to wait and see how things work out eventually, but for now there is no reason to be worried too much.

There is of course a lot more interesting information in the three articles, so don’t forget to visit GameSpot, Gamasutra and GameInformer and read them.